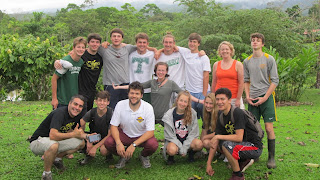 Big thanks to all the parents that reached out to help us return to Louisville. We especially want to thank Mrs. Lisa Tuell and Mrs. Smith for their help getting us a place to stay and some delicious food. Muchas Gracias! We had a wonderful trip and look forward to the Student Presentations, Thursday night at 7pm.
Post a Comment
Read more 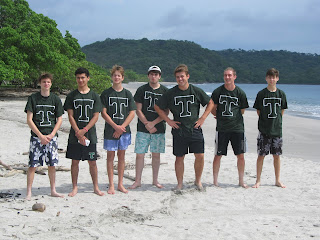 Perfect ending to a wonderful trip. Students spent the afternoon on Playa Cabuyal... in northwest Costa Rica. After some swimming and exploring the inlet area, they were served an excellent BBQ meal on the beach.  Even though we didn't see any monkeys on our morning hike with Freddie (yesterday), a large troop of monkeys came right through the camp. Our next adventure is to navigate the jungles of the airport... wish us luck. Trinity Students Enjoying the Sun Pacific Ocean... Here we come. Fearless Leader... John Doleman Family   BBQ on the beach.... chicken, sausage, and steak with homemade guacamole and pico de gallo. YUM! Chillin with family. Monkey with a lil baby on it's back. Our final morning at Horizontes yielded a troop of monkeys, right out the back door. Eddie! Mi Amigo!
Post a Comment
Read more 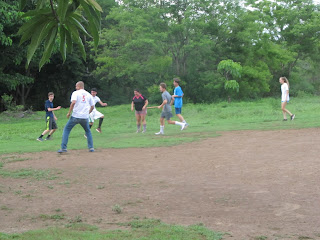 After a quick lunch at Horizontes, we moved to the classroom to discuss the second year program. Students interested in the program, which centers around the study of Bioinformatics, can go for 10 days of research and fun under the care of Dr. Gabriel. Mr. Doleman introduced us to Veronica, a turtle researcher and student at UCR. Veronica explained the research they conduct at Playa Cabuyal and the recent presentation she gave at the World Turtle Symposium in Las Vegas. After a quick break... word spread that Vanessa (the manager of Horizontes) had rallied the locals to a game of futbol. What an awesome experience to see several generations of Costa Ricans playing soccer with high school students from Kentucky. It lasted more than an hour and the cheers and laughter could be heard all over the valley. Even Eddie (our driver) came to play... sporting his #5 shirt that he got when he voted for his local congress candidate.  The night ended with a turtle sweep of the beach. Stude
Post a Comment
Read more Our adventure at Finca La Anita has just ended and we are now embarking on a new journey in the dry forest. An hour ago, we arrived at the Horizontes Research Station, one of the largest protected areas in Costa Rica. There are several adventures ahead, including a nature hike, turtle class, turtle sweeps on the beach, and a long afternoon of fun on the beach. Keep watching the blog to see more. - Mr. Heintz Picture of our dorms... from the top of the fire tower.
Post a Comment
Read more 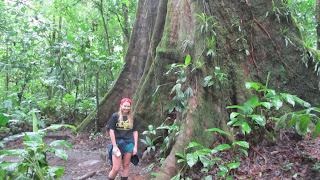 We started the day with an amazing breakfast with rice and beans, toast, and scrambled eggs. From there, we were greeted with three trucks ready to take us to Sensoria. The road there was bumpy and harsh, filled with rivers and rocks, but it was enjoyable to hang out with others on the way there. We even picked up a hitchhiker to take back to his sister's house. From there we continued our journey to arrive at the beautiful Sensoria. Once we arrived we were greeted by our tour guide, who lead us up rocky paths uphill and downhill with many many stairs. We arrived at our first destination, which was the "Blue Waterfall". It was a long beautiful, pure blue waterfall, just as the name suggests. We took a few pictures as seen below and went to our second place. The second place was a cold spring, which we were able to swim in and climb on the rocks. It was insanely cold and really refreshing! John was the first to hop in! After that, we went to our third and final spot in Sen
Post a Comment
Read more 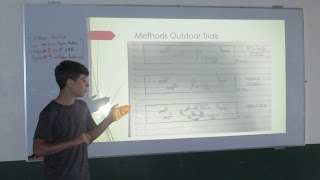 Congratulations to all the students, both Trinity and Lexington Catholic, for wonderful presentations. Each group presented their findings to both Dr. Pinto, Ibrahim, Pablo, Mr. William, Mrs. Angela, and Mr. Doleman. We are very proud of their accomplishments and can't wait till the parents have a change to see it as well. The rest of the trip consists of a tour of Sensoria (volcanic waterfalls), Chocolate Tour, a tour of the dry forest (with Mr. Freddy), explanation of Turtle Research with midnight turtle sweeps, and a relaxing afternoon on the beach. Even though we are finished with the research projects... we have a lot to do and more to discover. - Mr. Heintz Great group of researchers. Waiting for a late night walk.
Post a Comment
Read more
More posts